August 21st, 2019
Ryan Joins the Executive Board of the American Cancer Society - Kentucky

After more than five years of fundraising for the American Cancer Society's Making Strides Against Breast Cancer, the Kentucky area board added Ryan as a member of their executive board. This volunteer position gives Ryan the opportunity to help shape the future of the American Cancer Society's efforts in Kentucky, especially in the areas of communication and design. As part of this position Ryan will continue to serve the community through fundraising for Real Men Wear Pink and emceeing Making Strides Against Breast Cancer events.

In Ryan's fourth year raising money for Making Strides Against Breast Cancer he brought in more than $3,500. This was also his second year co-emceeing both the event at Louisville's Waterfront Park and the kickoff breakfast in August. Making Strides took place on an abnormally cold Saturday morning in 2017, with a temperature of 38 degrees as the walk kicked off. It may have been cold, but Ryan's fundraising efforts in memory of his mother brought warmth to those in need!

"Ryan Hoke, meteorologist at WAVE 3 News in Louisville, became the 6th local TV meteorologist to participate in our Partners Operational Weather Simulation (POWS) program at NWS Louisville on Thursday, November 10. The training, conducted on our Weather Event Simulator (WES), is designed to give our partners a firsthand experience of what it is like to be responsible for issuing potentially life-saving warnings as the radar analyst for a past severe weather event."

For the third year in a row, Ryan joined in the fudraising effort for the American Cancer Society's Making Strides Against Breast Cancer campaign. Through online donations Ryan collected over $4,000 for the organization's Louisville-based event. His enthusiasm for this campaign comes from losing his mother to breast cancer when he was 14 years old. Ryan is proud to have raised the funds this year through the Real Men Wear Pink campaign, a program that gives male leaders in the community a visible supporting role in breast cancer awareness fundraising.

After review of Ryan's on-air forecasts and a rigorous meteorological exam, the American Meteorological Society has awarded Ryan their Certified Brodcast Meteorologist seal of approval. This is the gold-standard for broadcast meteorologists. Ryan is the 652nd meteorologist to hold this certification, which requires continuing education hours. This comes just a little over a year after Ryan's graduation from Mississippi State University.

At the Mississippi Associated Press Broadcasters awards for 2012 in Jackson, MS Ryan took home 1st place in the College TV - Best Weathercast division. The event, which took place on April 20th, 2013 at the Mississippi Children's Museum, highlighted professional and college broadcast journalism achievements from around the state.

Ryan has been named meteorologist and marketing graphic artist at WAVE 3 News in Louisville, Kentucky. The connection between Ryan and WAVE 3 News is deep as he was mentored by their meteorologists and even interned at the station in 2012. This really is a dream come true for him as he returns to his hometown after graduating with his meteorology degree from Mississippi State University in May. 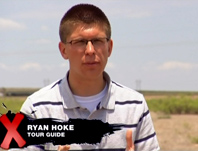 While working this past spring with Storm Chasing Adventure Tours, a crew from Travel Channel'sExtreme Tours came out to film Ryan and the rest of the group for a five-minute feature segment on the show. The program featured Ryan as one of the weather experts on the tour and he explained on camera the processes behind severe storms and what storm chasing tours are like. The show aired on September 6th, 2012 in the United States.

The American Meteorological Society and National Weather Association have awarded Ryan with scholarships this summer. Only weeks after Ryan had been awarded the named Carl W. Kreitzberg Endowed Scholarship from the AMS, the NWA tweeted that Ryan had been named the winner of their Broadcast Meteorology Scholarship.

Ryan was a guest panelist on the April 30th, 2012 edition of the popular weather podcast WeatherBrains. While on the show, he talked about his position at Storm Chasing Adventure Tours, talked with featured guest Dr. Chuck Doswell about the text of tornado warnings, and about his job at WBBJ-TV in Jackson, TN. The hosts of the show are James Spann of ABC 33/40 in Birmingham, AL, Bill Murray, Kevin Selle, J.B. Elliot, and Brian Peters.

As part of an honors college credit for his applied climatology course at Mississippi State, Ryan conducted a study on how Louisville's urban heat island effect affects the official climate observations at Louisville International Airport. Using data from MADIS and ASOS sites within the city limits, he was able to quantify by how much this affect skewed the temperature observations in 2009 and 2010. The idea for conducting this study came as a result of Ryan seeing the stark difference between the temperature at his home weather station and the official weather observations in Louisville while growing up.


December 4th, 2010
Ryan Reports Live from the Starkville Christmas Parade for Second Year in a Row

Ryan was chosen for the second time to be the "roving reporter" for WOBV-TV 5's coverage of the 2010 Starkville, MS Christmas Parade. He interviewed numerous parade participants during the parade's run through downtown Starkville and gave a few weather updates throughout the show. 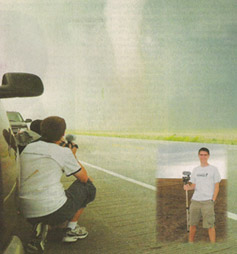 Mississippi State University's student-run newspaper The Reflector ran a feature article about Ryan's meteorological accomplishments on September 24th, 2010: "Ryan Hoke, Mississippi State University sophomore professional meteorology major, turned a childhood obsession with thunderstorms into a career in weather forecasting.Hoke's accomplishments include an interview on The Weather Channel, feature weather forecasts on WAVE-TV in Louisville, Ky., and WBBJ-TV in Jackson, Tenn., a job as a tour guide for Storm Chasing Adventure Tours and a full scholarship from MSU. He said his fascination with weather began at age five when he developed an intense fear of heavy rains and lightning."

After seeing tornadoes near Walsh and Campo, Colorado during his third annual storm chasing trip, Ryan was interviewed on both The Weather Channel and WAVE 3 News in Louisville, Kentucky. The Weather Channel interview on May 26th with Kim Perez was conducted via phone while the WAVE 3 News interview on May 31st with Kevin Harned and John Belski used Skype. View each of the interviews below. 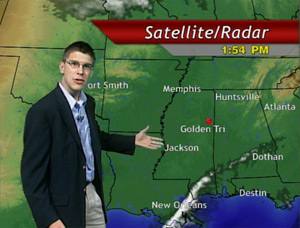 "Ryan Hoke of Fisherville is one semester closer to realizing his dream of becoming a weatherman. The Manual High School graduate just finished his first semester at Mississippi State University's program in broadcast meteorology. And, in true Hoke style, he found a way to get ahead."

Ryan was chosen to be the "roving reporter" for WOBV's TV coverage of the 2009 Starkville, Mississippi Christmas Parade. He interviewed numerous parade attendees and participants, including members of the Mississippi State University football team. 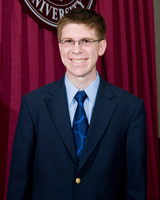 "STARKVILLE, Miss.--Six recent high school graduates from the Magnolia, Bayou, Bluegrass, and Peach states are receiving Mississippi State's most prestigious scholarships. Ryan Hoke, the son of Ken and Linda Hoke, is a Dupont Manual Magnet High School graduate who also is receiving the James E. Casey Scholarship and the Kentucky House of Representatives' Academic Achievement Award. During high school, he received a variety of scholastic honors while also pursuing a personal interest in meteorology, including operation of a weather Web site for the Louisville area. He plans to major in broadcast meteorology."

"Ryan Hoke is still in high school, but he knows just what he will be studying at Mississippi State University this fall: meteorology. He plans to use his degree, his love of weather, and his unruffled charm as a television weather broadcaster. The young weatherman is already a sort of institution in his hometown of Fisherville, Kentucky, where he keeps the public informed of local weather on his Ryan's Weather web site and in weekly videos he produces and posts to his web site. He has even been a guest weather broadcaster on WAVE TV 3. (A video of him on WAVE TV 3 is pretty impressive. It looks to us like he has been doing the weather in front of a camera for years!) And he is not just a proud weather geek, he's a proud, entrepreneurial weather geek! Check out the store on his site where he sells such very cool things as tee-shirts that say, "I'm a Weather Geek. Are YOU?" (Altogether now: "Yesssss!!") And what kind of station does the Boy Wonder use? Of course, it's a Vantage Pro2. Ryan was featured in a story by Charlie White in the Courier-Journal. If you happen to run into Ryan, you might want to ask for his autograph now and beat the crowds."

As the winner of the WAVE 3 News "Be a Weathercaster" contest, Ryan was given the opportunity to appear with John Belski on the 5:30pm news on 2/9/09 to present the weather forecast. See the full television appearance in the video below: 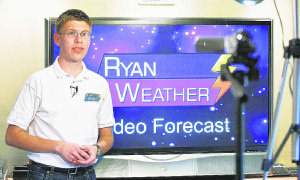 He is already working on his camera presence as a weatherman on his Web site, Ryan Weather. Each Saturday, Ryan, who lives with his parents and siblings near Fisherville, heads for the upstairs loft near his bedroom to shoot his own three-minute weather segment." 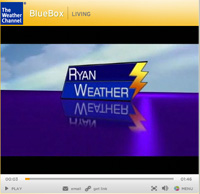 In August of 2008, Ryan was named "Most Likely to Become a Meteorologist" in a contest presented by The Weather Channel Interactive. A presentation of the winners by Weather Channel meteorologist Stephanie Abrams can be seen by clicking here. The Washington Post's "Capital Weather Gang" mentioned Ryan's contest entry in a July 2008 blog post.